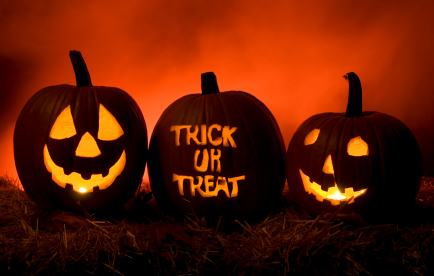 Other western countries embraced the holiday in the late twentieth century including Ireland, the United States, Canada, Puerto Rico and the United Kingdom as well as of Australia and New Zealand.

Halloween has its origins in the ancient Celtic festival known as Samhain (pronounced “sah-win”).

The festival of Samhain is a celebration of the end of the harvest season in Gaelic culture. Samhain was a time used by the ancient pagans to take stock of supplies and prepare for winter. The ancient Gaels believed that on October 31, the boundaries between the worlds of the living and the dead overlapped and the deceased would come back to life and cause havoc such as sickness or damaged crops.

The festival would frequently involve bonfires.

Halloween has always been a holiday filled with mystery, magic and superstition. Masks and costumes were worn in an attempt to mimic the evil spirits or appease them.

The American Halloween tradition of “trick-or-treating” probably dates back to the early All Souls’ Day parades in England.Trick-or-treating, is an activity for children on or around Halloween in which they proceed from house to house in costumes, asking for treats such as confectionery with the question, “Trick or treat?”

The “trick” part of “trick or treat” is a threat to play a trick on the homeowner or his property if no treat is given.  Trick-or-treating is one of the main traditions of Halloween. It has become socially expected that if one lives in a neighborhood with children one should purchase treats in preparation for trick-or-treaters.

Part of the history of Halloween is Halloween costumes. The practice of dressing up in costumes and begging door to door for treats on holidays goes back to Middle Ages. Trick-or-treating resembles to late medieval practice of “souling” when poor folk would go door to door on Hallowmas (November), receiving food in return for prayers for dead on All Souls Day (November 2).

The history of Halloween has evolved.  The activity is popular in the United States, the United Kingdom, Ireland, Canada, and due to increased American cultural influence in recent years, imported through exposure to US television and other media, trick-or-treating has started to occur among children in many parts of Europe.